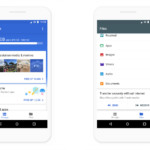 Google has filled a big hole in its Android system by releasing Files Go! , its mobile file organization and sharing app. Launched in beta last month , the app makes it easier for Android users to free up space, find files, back them up to the cloud, and share them with other smartphones, even offline. It’s one of the linchpin apps of Google’s Oreo 8.1 (Go edition) , a slimmed down version of Android meant for the less-powerful devices in developing nations. Files Go! will also be handy for power users who currently lean on third-party file organization apps, which are often paid or ad-supported . On top of giving you direct access to your downloads, received files, apps, images, video, audio and documents, it will offer suggestions for freeing up space. For instance, it can tell you how much you can free from your app cache, unused apps, large files and downloaded files. It’ll also offer to move files to an SD card, if you have one. Another long overdue feature is the ability to share files offline, Airdrop-style. When you enable the feature, it lets you create a “hotspot” to connect and transfer files via Bluetooth. If a friend also has Files Go and file sharing enabled, it’s simply a matter of hitting send or receive. “The file transfers are encrypted, fast (up to 125 Mbps) and free, ” says Google. The app can also remind you when you’re low on storage and let you backup files to Drive, OneDrive, Dropbox and other apps. Google says it has been testing the app for a month and has saved users an average of 1GB space. It’s now available for all on the Google Play Store , assuming you have Android 5.0 or higher. ” Source: Google