If someone asks you to name a Google X Labs moonshot, you’d probably say Glass , self-driving car or maybe even Project Loon . But as you might remember from the WSJD Live conference last year, it also has a flourishing Life Sciences division that employs 100 doctors and scientists, and one of their main projects is a Fitbit-like bracelet that can detect cancer cells . Now, The Atlantic has taken a peek into the division’s headquarters in Mountain View. The publication’s video (below the fold) also explains why the team has to create synthetic human skin mixed with the real thing to cover disembodied arms. See, those arms serve as testers for the Labs’ cancer-detecting bracelet project. For that to make sense, though, you need to understand how the system works: first you’ll need to take pills packed with nanoparticles that circulate throughout the body looking for cancer cells. If they find any, they’ll bind to those cells, which then literally light up. After that, the cell-particle combos make their way underneath the bracelet, since it has a magnet that attracts the nanoparticles. Since the team wants to make sure that an illuminated clump of cancer cells is visible through human skin, they created those practice arms. They’re covered in skin exhibiting different properties (thickness, etc.), as well as skin mimicking those of different ethnicities and skin tones. The bracelet probably won’t be sniffing out cancer in the real world anytime soon, though, so watch the interview for now to see what it’s like inside Google X Labs’ Life Sciences department. Filed under: Science , Google Comments Source: The Atlantic 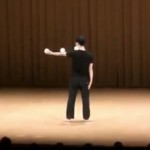 This is one of the most impressive juggling routines we’ve ever...