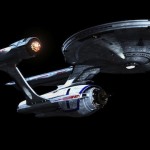 Bob Orci is reportedly talking to CBS about a new Star...

Alibaba Posts $1 Billion in Sales in 5 Minutes on Singles’...