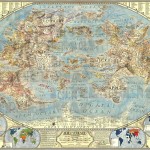 Martin Vargic has produced a gorgeous mashup of XKCD’s Map of Online Communities and the classic National Geographic Maps, producing a work of art that is a wonder to behold. It’s for sale on Zazzle , as a $37, 34″x22″ poster. I was originally inspired by map of the internet created by xkcd, showing most popular social networks as countries and regions, back in 2010. It was not my original idea, but I extended it to such a scale for the first time. I used photoshop for the majority of drawing. The base style of the map was inspired by the National Geographic Maps, I also used Winkel Tripel Projection and similar border coloring fashion. I created the map in quite a short time, three weeks to be exact. I often worked early in the morning, and I can say I really enjoyed it. I got the data about website sizes mainly from Alexa and similar online services. Currently, I am working on the next versions of the map, which will be even more ridiculously detailed than the previous one, and will encompass all major websites without any significant exceptions, it will be coming in mid-february. The map is divided into 2 distinctive parts; the eastern continent, “the old world” showcases software companies, gaming companies and some of the more real-life oriented websites. Western part, “the new world” is composed from two major continent, northern one showcasing social networks, search websites, video websites, blogs, forums and art websites. All major adult-oriented websites, in addition to varioius warez and torrent sites, are located on the southwestern continent of the map. In the very south of the map, there is located “Great Southern Land” of obsolete websites and online services. Outside the main map, there are also 4 minimaps showing NSA monitoring by country, most used browser, most used social network, and internet penetration by country. Map of the Internet 1.0. ( via IO9 )