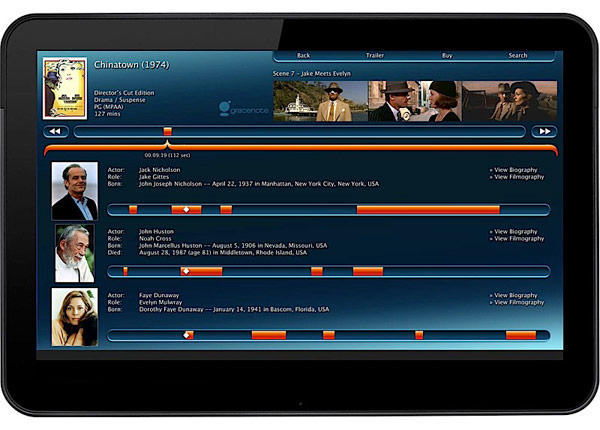 It’s that pop song again — you know, the one that forces you to flip the radio to anything else. But still, you’re dying to know what it’s called, if only to avoid hearing it ever again. Boom Boom? Heartbeat? Shazam! Super Bass, by Nicki Minaj. If you haven’t used Shazam, chances are you know someone that does, and often. Gracenote’s new Automatic Content Recognition (ACR) technology takes that same concept and applies it to TV shows and movies, and it’s coming soon to a smartphone or tablet near you. A yet-to-be-named app will let your device “listen” to whatever you’re watching, identifying TV shows and movies based on dialogue or the soundtrack, then displaying a variety of info about whatever’s on screen. Gracenote is also expanding its audio offerings, showing off both HABU and MoodGrid, which are mood-based music curation services for mobile devices and in-car systems, respectively. Software groups songs based on emotional themes, then plays them back depending on your selected mood. Happy? Sad? Intrigued? We’ll need to wait until CES for the full scoop from Gracenote.