Lync rebranded as “Skype for Business” in 2015 release 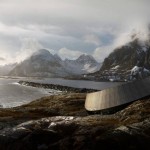 This serpent-like hotel, coiled around the glacial outcroppings of Norway’s gorgeous...