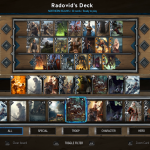 Didn’t you hear? Collectible card games are all the rage these days, what with Blizzard’s Hearthstone sporting over 20 million players, Magic: The Gathering going through some kind of renaissance, and publishers like Bethesda  definitely not trying to cash in on the whole thing with games like The Elder Scrolls: Legends . And so at this year’s E3 we have yet another entry in the genre from developers CD Projekt Red, a  Witcher 3 spin-off called  Gwent . The difference is, Gwent is far more than just a collectible card game. This one has an honest-to-god proper storyline. There’s even an open-world map to explore. For the uninitiated, Gwent was originally a collectible card game embedded into the vast world of The Witcher 3 . Only, as player data began to trickle in, CD Projekt Red discovered that many players were spending hours roaming inns during quests just to play Gwent . Some even ignored the main game entirely. This was more than enough incentive for the developer to spin Gwent off into its own free-to-play game across PC, Xbox One, and PlayStation 4. And in true CD Projekt Red fashion, it’s gone a little overboard in the process. Instead of just pitching players against each another in one-on-one card battles, Gwent features several single-player campaigns, each of of which has its own unique storyline and lead character, is fully voice acted, and is brought to life via some highly stylised 2D drawings that gently slide across the screen. There’s even an overworld map where, in the demo I was shown at least, you control a cute 2D Geralt to explore and find hidden snippets of story, or extra cards to add to your deck. Each campaign is said to last a whopping 10 hours or so too. Read 9 remaining paragraphs | Comments