wiredmikey writes “Microsoft on Friday said that attackers breached the email accounts of a “select number” of employees, and obtained access to documents associated with law enforcement inquiries. According to the company, a number of Microsoft employees were targeted with attacks aiming to compromise both email and social media accounts ‘..We have learned that there was unauthorized access to certain employee email accounts, and information contained in those accounts could be disclosed, ‘ said Adrienne Hall, General Manager at Microsoft’s Trustworthy Computing Group. ‘It appears that documents associated with law enforcement inquiries were stolen, ‘ Hall said. Targeted attacks like this are not uncommon, especially for an organization like Microsoft. What’s interesting about this is that the incident was significant enough to disclose, indicating that a fair number of documents could have been exposed, or that the company fears some documents will make their way to the public if released by the attackers—which may be the case if this was a ‘hacktivist’ attack.” Read more of this story at Slashdot. 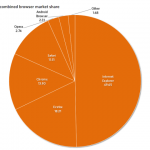