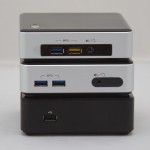 LAS VEGAS, NEVADA—Intel released its next wave of Broadwell processors this week at CES, and PC companies are already preparing systems with the chips inside ( Lenovo’s new X1 Carbon and the new Dell XPS 13 are among our favorites so far). Intel is also taking this opportunity to refresh some of its own offerings, most notably the “Next Unit of Computing” (NUC) mini desktop PCs . NUCs exist somewhere between classic DIY computer-building projects and ready-made systems from OEMs. Intel supplies a motherboard inside of a box, and you get to pick the what RAM and SSD you want to use and install them yourself. Intel will be refreshing all of its high-to-mid-end NUCs in the next few months, and these boxes will serve both as systems for people who want a small but fairly capable PC and as a showcase for the new features in Broadwell-U. We got to see and hold the new desktops ourselves, and in addition to the expected upgrades, they bring some interesting features to the platform. A wider range of systems Andrew Cunningham The short Broadwell NUC on top of the Haswell NUC on top of the Ivy Bridge NUC. Year by year, they keep shrinking. 4 more images in gallery Intel is launching a total of seven separate NUC configurations, five that are aimed at the consumer market and two that are intended for use in businesses. Read 11 remaining paragraphs | Comments

This Tutorial Shows You How to Fake Tilt Shift Videos

British Film Institute To Digitize 100,000 Old TV Shows Before They...