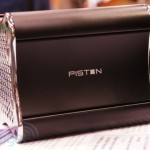 Remember when Xi3 announced a Kickstarter project for its modular computers late last year? Well, those machines are here today at CES, thanks in no small part to some lofty backing from Valve . We got a first look at its latest mini-PC, code-named Piston, tonight — and though a more comprehensive demo is to come, we walked away with some impressions nonetheless. Of course, Valve wouldn’t back this system if it didn’t have some serious graphics chops. It’s optimized to run Valve’s Steam platform — and specifically big-picture mode — and to that end it packs a quad-core chip. Most specs remain vague, though the Piston apparently offers up to 1TB of storage. The package is tiny yet rugged, with an aluminum chassis that’s made to resist heat (and that will certainly come in handy during gaming sessions). Xi3 is also touting the system’s low energy consumption; it runs on just 40W. And it’s somewhat future-proof, too, with a modular motherboard that lets you swap out components when newer tech becomes available. Our hands-on gallery will have to tide you over till we get a full walkthrough at Xi3’s booth tomorrow. Gallery: Xi3 Piston Modular Computer hands-on Joseph Volpe contributed to this report. Filed under: Desktops , Gaming Comments