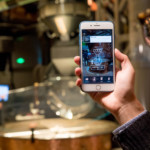 Watch a Tunnel Get Built Under a Highway in Just One...