Download Old Versions of iOS Apps with a Clever Workaround 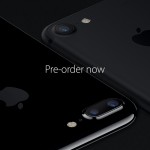 Apple announces the water-resistant iPhone 7 and 7 Plus

UPS Is About to Increase Their Rates