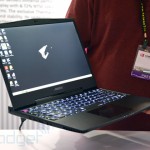 Following the impressive Razer Blade we reviewed last month, Gigabyte also wants a piece of the portable gaming laptop action with its new Aorus X3 line, a sub-14-inch Windows 8.1 device that claims to be the world’s “most powerful and lightest” in its class. In terms of weight, it starts from 4.12 pounds (1.87kg) which is more attractive than the new Blade’s 4.47 pounds (2.03kg). The smaller X3 has an impressive 13.3-inch QHD (2, 560 x 1, 440) LCD, whereas the larger 13.9-inch X3 Plus lets you choose between a QHD panel and a sweeter QHD+ (3, 200 x 1, 800) version. Both variants of the gaming beast come with Intel’s Core i7-4710HQ (2.5-3.5GHz), 8GB of DDR3L-1600 RAM (with a spare slot for another 8GB) and an NVIDIA GeForce GTX 870M with 6GB of GDDR5 memory. You can have a pair of 256GB or 512GB SSDs configured in RAID 0, meaning you get super fast access to a maximum of 1TB space. Together with the macro keys plus Gigabit LAN connection or 802.11ac WiFi, online gamers should have no problem entertaining themselves with these machines — at least until the 74Wh battery has been drained while gaming on the go. As you can imagine, these gaming laptops don’t come cheap: Both the X3 and the X3 Plus will go from $2, 099 when they launch in Q3 this year, with one-year global warranty plus one-year local warranty included. Filed under: Gaming , Laptops Comments

Uber is huge in India. Here’s why.