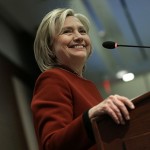 Members of the US House of Representatives hoping to get a look at Hillary Clinton’s personal email server just got a big disappointment. Clinton’s attorney has confirmed to a House committee on Benghazi that, after handing over work-related email to the State Department, the politician both “chose not to keep” personal messages and set a 60-day limit on what the server retains. In short, she effectively wiped it clean. There’s no going back to mail from her Secretary of State days beyond the 30, 490 messages on the record, or roughly half of what the server held during the period. Naturally, both sides are trying to spin the news to suit their own ends. The head of the committee, Rep. Trey Gowdy, is portraying this as an attempt to block anyone from trying to “check behind her analysis” and see if she deleted important conversations. Committee member Rep. Elijah Cummings, meanwhile, calls the server request a “political charade” and wants the on-the-record messages made public as proof that Clinton is squeaky clean. The problem is that there’s no practical way to verify the truth, no matter who’s right — officials have to take it on faith that Clinton followed the letter of the law and delivered all the messages related to her political life. [Image credit: Win McNamee/Getty Images] Filed under: Internet Comments Via: The Hill Source: House of Representatives (PDF)