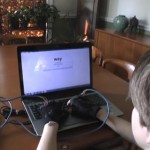 You know what can teach you Braille and piano a lot more quickly than traditional means? Vibrating gloves, or gloves with haptic feedback, if you will. In fact, IEEE Spectrum senior editor David Schneider was so intrigued by the idea, that he put together his own version to serve as a haptic touch-typing tutor for his 11-year-old son. He admits that his gloves (made using transistors, $14 worth of vibration motors purchased from eBay and long cords connecting them to an Arduino Nano board) aren’t as sleek as Georgia Tech’s piano-teaching ones . But, hey, they worked, and once he created a program to go along with them, they did their job well enough. Schneider’s program displays one among the 100 most common English words at random on screen — it does so one letter at a time, sending vibrations to the right finger as the letters appear. Not bad for something he merely cobbled together. But (as he realized later on), the program would’ve been a lot more fun and effective if it were more of a typing game than a boring digital tutor. Filed under: Peripherals Comments Source: IEEE Spectrum