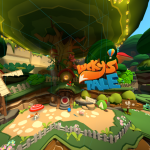 What’re those SteamVR “chaperone” grid lines doing in an Oculus-exclusive game? Find out yourself if you own an HTC Vive and use the new Revive patch on many “exclusive” Oculus games. (credit: Sam Machkovech) In the race to the top of virtual reality, Oculus and HTC have kicked off a hardware showdown the likes of which we haven’t seen since the “Nintendon’t” days. However, the war includes a curious compatibility issue: HTC’s current software hub, SteamVR, can be accessible by Oculus headset wearers, but Oculus Home doesn’t currently support the HTC Vive. Oculus founder Palmer Luckey has publicly stated that “we can only extend our SDK to work with other headsets if the manufacturer allows us to do so,” seemingly passing the buck to HTC and Valve in regard to why its Oculus Store games don’t natively support the other leading PC headset. Valve has denied this assertion . Either way, we no longer have to wait for the companies to settle their legal and licensing differences, thanks to the efforts of the LibreVR plugin, dubbed Revive . Short version: it works, as proven by the above screenshot we snapped of pack-in Oculus game Lucky’s Tale running within the SteamVR interface (complete with its “chaperone” boundary lines). The author’s test system, which includes a 4.2 GHz i7 processor and a GTX 980Ti, ran all test games without hitches in performance, while other users have reported similarly smooth performance on “VR-ready” Windows 10 PCs. Read 6 remaining paragraphs | Comments

This Is Quite Possibly the Ugliest Bug Ever Found Trapped in... 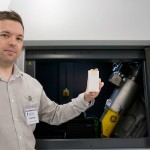