Federal authorities have charged two men suspected of running an international operation that used electronic devices planted at automatic teller machine locations to compromise more than 6,000 bank accounts. The operation—which targeted Capital One, J. P. Morgan Chase, and other banks—netted, or attempted to net, about $3 million according to an indictment filed in Manhattan federal court. It allegedly worked by obtaining payment card readers from Hungary and other countries and installing them on top of card readers already located on ATMs and doors to ATM vestibules. The fraudulent readers were equipped with hardware that recorded the information encoded onto a card’s magnetic stripe each time it was inserted. A hidden pinhole camera with a view of the ATM keypad then captured the corresponding personal identification number. Antonio Gabor and Simion Tudor Pintillie allegedly led a gang of at least nine other people who regularly planted the skimming devices in the Manhattan, Chicago, and Milwaukee metropolitan areas, prosecutors said. They would later revisit the ATM to retrieve the information stored on the skimming devices and cameras. Gang members would then encode the stolen data onto blank payment cards and use the corresponding PINs to make fraudulent purchases or withdrawals. Read 3 remaining paragraphs | Comments

Taken from:
How alleged crooks used ATM skimmers to compromise thousands of accounts 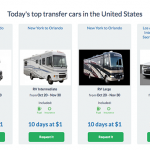 TransferCar Lets You Rent a Car One-Way for Free