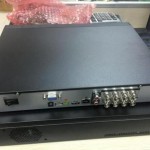 A major battle is underway for control over hundreds of millions of network-connected digital video recorders, cameras, and other so-called Internet of Things devices. As Ars has chronicled over the past two weeks, hackers are corralling them into networks that are menacing the security news site KrebsOnSecurity and other Web destinations with some of the biggest distributed denial-of-service attacks ever recorded. Johannes B. Ullrich, a researcher and chief technology officer for the SANS Internet Storm Center, wanted to know just how vulnerable these devices are to remote takeover, so he connected an older DVR to a cable modem Internet connection. What he saw next—a barrage of telnet connection attempts so dizzying it crashed his device—was depressing. “The sad part is, that I didn’t have to wait long,” he wrote in a blog post published Monday . “The IP address is hit by telnet attempts pretty much every minute. Instead of having to wait for a long time to see an attack, my problem was that the DVR was often overwhelmed by the attacks, and the telnet server stopped responding. I had to reboot it every few minutes.” Read 4 remaining paragraphs | Comments

Read More:
How hard is it to hack the average DVR? Sadly, not hard at all

Capture Full 3D Models In Seconds With Just Your Phone