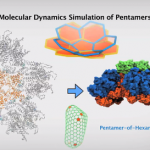 How modeling HIV on an atomic level could lead to a cure Part of what makes the HIV virus so difficult to kill — aside from being thousands of times smaller than an average human cell — is that it’s covered in several layers of protective proteins. Techniques are already being developed to attack the virus when it’s at its weakest and most vulnerable. But new models — developed by scientists using the University of Illinois’ “Blue Waters” supercomputer — are finally giving researchers an atomic-level look at the formidable barrier mechanism enclosing the heart of the virus.

Read More:
How modeling HIV on an atomic level could lead to a cure