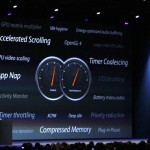 Apple execs talk up the new features in OS X Mavericks. At yesterday’s Worldwide Developer Conference (WWDC) keynote, Apple made some bold claims about the future of battery life in its laptops. A new 13-inch Macbook Air, for instance, should now run a full 12 hours on a single charge , up from 7 in the previous model. Assuming that testing bears out Apple’s numbers, how did the company do it? The obvious part of the answer is “Haswell”—but that turns out to be only part of the story. The power efficiency gains found in Intel’s new Haswell CPUs should provide modest gains in battery life, and such gains were widely expected. Back in January, Intel claimed that the new Haswell CPUs featured the “largest generation-to-generation battery life increase in the history of Intel” and said that the chips were the first of its architectures designed “from the ground up” for Ultrabooks and tablets. The new chips run at lower clockspeeds and at lower wattages. Less expected was the announcement of OS X 10.9 “Mavericks” and its own focus on mobile power usage. While Apple made a few comments during the keynote about the new technologies meant to enable longer battery life, more information appeared later in the day with the separate release of a Core Technology Overview (PDF) document that offers a high-level look at some of the Mavericks internals. Read 11 remaining paragraphs | Comments