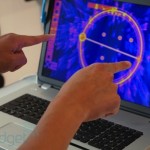 What do a fanless PC and a motion-controlled laptop have in common? Nothing, really; just that HP is going to be first to market with both of these things. After teasing a fanless tablet back in June, the company has formally announced the Spectre 13 x2, which isn’t actually a tablet so much as a hybrid laptop. Additionally, HP unveiled a special edition version of its Envy 17 notebook with a Leap Motion controller built into the palm rest. Starting with the Leap Motion machine, this is truly the same Envy 17 that’s already on the market, complete with an aluminum chassis, backlit keyboard and generous Beats branding. Except, you know, it has a conspicuous motion sensor below the keyboard, allowing you to control games and other apps using hand gestures. Per Leap Motion’s requirements, HP includes a shortcut to Leap Motion’s Airspace Store, where there are currently 100-plus apps and counting. (If you read our review, you know the selection is hit or miss.) Once you calibrate the sensor, you can turn the controller off by pressing the spacebar plus the Fn key; a small LED indicator will light up to let you know when it’s on. Surprisingly, too, that the sensor doesn’t add to the thickness of the laptop, as the module only measures 3.5mm thick (granted, a 17-inch machine probably has plenty of leeway inside the chassis). Look for it October 16th, with a starting price of $1, 049.99 and your choice of Intel processors and NVIDIA graphics.%Gallery-slideshow88784% Filed under: Laptops , HP Comments