An anonymous reader writes: Hewlett-Packard says its upcoming spinoff of its technology divisions focused on software, consulting and data analysis will eliminate up to 30, 000 jobs. The cuts announced Tuesday will be within the newly formed Hewlett Packard Enterprise, which is splitting from the Palo Alto, California company’s personal computer and printing operation. “The new reductions amount to about 10 percent of the new company’s workforce, and will save about $2.7 billion in annual operating costs.” The split is scheduled to be completed by the end of next month. “The head of the group, Mike Nefkens, outlined a plan under which it is cutting jobs in what he called ‘high-cost countries’ and moving them to low-cost countries. He said that by the end of HP Enterprise’s fiscal year 2018, only 40 percent of the group’s work force will be located in high-cost countries.” Read more of this story at Slashdot.

Original post:
HP To Jettison Up To 30,000 Jobs As Part of Spinoff

The New Roomba 980 Can Now Watch Your Dirt 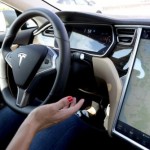