HTC’s HD7 was certainly one of the most handsome devices to be launched back at Windows Phone 7’s retail introduction late last year — and really, when you take the HD2’s heritage as your starting point, it’s hard to go wrong. Of course, in the last year and a half, mobile display technology has advanced by leaps and bounds — and the original HD7 was using nothing more than a standard, old-school TFT LCD with less-than-perfect contrast and viewing angle specs. Well, that’s where the HD7S comes into play: the “S” in the name presumably stands for Super LCD , the newer type of display that HTC’s been using on recent 4.3-inch models like the Thunderbolt 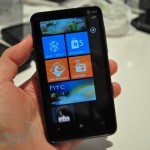