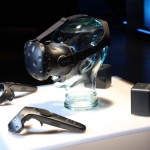 Sam Machkovech Say hello to the HTC Vive Pre—the near-final version of the VR system. The headset comes complete with two tracking wands and two laser-tracking stations. 12 more images in gallery SEATTLE, Washington—Valve and HTC took the wraps off of their latest, near-final version of the Vive virtual reality system at this month’s CES, but we barely got a chance to play with the refreshed headset. That changed on Wednesday thanks to an event hosted in Valve’s hometown of Seattle, where the company offered Ars 12 lengthy demos of upcoming games and apps. Our detailed impressions of those dozen demos are forthcoming, but in the meantime, we have good news. The pre-release Vive Pre hardware may not be phenomenally better than the original Vive dev kit, but every change has made an already-impressive VR system feel that much more complete, comfortable, and worth salivating over. Like the original HTC Vive dev kit , the Vive Pre asks users to wear a VR headset whilst walking around a pre-defined, real-life space and holding motion-tracked wands in each hand. These wands’ main buttons are still a gun-like trigger and a thumb-accessible, clickable trackpad; in addition, the handle has a button on each side of the controller’s grip, and those are now positioned for easier hand access. New menu buttons have been placed above and below the trackpad, as well. Read 9 remaining paragraphs | Comments

Seriously, this skull-drilling robot is good news for humanity