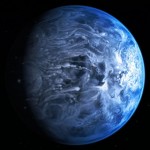 While exoplanets are seemingly a dime a dozen , their looks have been mysteries; they often exist only as measurements. Scientists using the Hubble Space Telescope have partly solved that riddle by pinpointing the visible color of an extrasolar world for the first time. By measuring reflected light, they can tell that HD 189733b (conceptualized above) is a cobalt blue, much like Earth’s oceans. Not that we can claim much kinship, though. The planet is a gas giant 63 light-years away — its blue tint comes from an atmosphere likely full of deadly silicate. As disappointing as that may be, the discovery should at least help us understand planet types that don’t exist in the Solar System. Filed under: Science , Alt Comments Source: ESA