One of the largest spam operations in the world has exposed its entire operation to the public, leaking its database of 1.37bn email addresses thanks to a faulty backup. From a report: A faulty backup has inadvertently exposed the entire working database of notorious spam operator River City Media (RCM). In all, the database contains more than 1.37 billion email addresses, and for some records there are additional details such as names, real-world addresses, and IP addresses. It’s a situation that’s described as “a tangible threat to online privacy and security.” Details about the leak come courtesy of Chris Vickery from macOS security firm MacKeeper who — with a team of helpers — has been investigating since January. River City Media’s database ended up online thanks to incorrectly-configured Rsync backups. In the words of Vickery: “Chances are you, or at least someone you know, is affected.” The leaked, and unprotected, database is what’s behind the sending of over a billion spam emails every day — helped, as Vickery points out, by “a lot of automation, years of research, and fair bit of illegal hacking techniques.” But it’s more than a database that has leaked — it’s River City Media’s entire operation. Read more of this story at Slashdot. 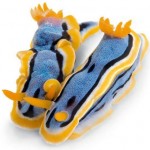 Beautiful, Fragile Nudibranchs Can Kill You