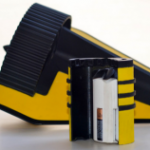 We’ve seen fire harnessed to power a phone charger for the great outdoors, with the nifty  FlameStower , now meet Hydrobee: another Kickstarter project aiming to provide an off-grid alternative for charging a battery you can then use to juice your phone. But, as its name suggests, Hydrobee is all about water. There’s two parts to Hydrobee. When wearing its ‘Stream Body’, the gizmo can be placed in a river or dragged behind a boat – so long as the water is flowing faster than 1.8m/s (or 4mph+) – and two to four hours later its battery will be fully charged. A smaller inner unit can also be attached directly to a flowing faucet to charge – so could be used as a back-up power generator for your phone during a power outage (so long as your taps don’t require electricity to pump the water to them). Once Hydrobee’s battery is juiced, you can then plug in a USB device to charge it – a secondary charging process that presumably takes several more hours. Hydrobee reminds me of a CDT project I worked on in school, where we stuck a dynamo on a paddle wheel-bearing rig designed to float in a river and stuck a micro bulb on top that we hoped would be powered by it… Long story short it didn’t work on demo day, but that’s technology demos for you. Hydrobee has clearly perfected the hydroelectric tech better than a bunch of schoolkids managed to. The prototype consists of a tiny hydropowered turbine sited in a can with rechargeable batteries and waterproofed electronics, and a USB 2.0 port – so you can juice up your phone or other USB-powered device. The internal batteries are 6 x 1.2V AA NiMH rechargeable cells of 2,500 mAh capacity, yielding a total of 15,000 mAh. It is still a prototype for now. And Hydrobee’s U.S.-based creator has put a call out for Kickstarter users to give him feedback on the sorts of things they’d like to be able to use the device for to help shape the final product. The campaign is looking to raise $48,000 in crowdfunding, with 17 days left to run. If it hits its funding target, Hydrobees will be shipped to backers next March. The Hydrobee turbine generator, which can be used to generate a charge from water from a running faucet or hose, is being offered to early Kickstarter backers for $24. Or it’s $78 for all the kit, including the floating Stream Body.

More:
Hydrobee Lets You Charge A Battery From A Fast-Flowing River To Juice Up USB Devices Off-Grid