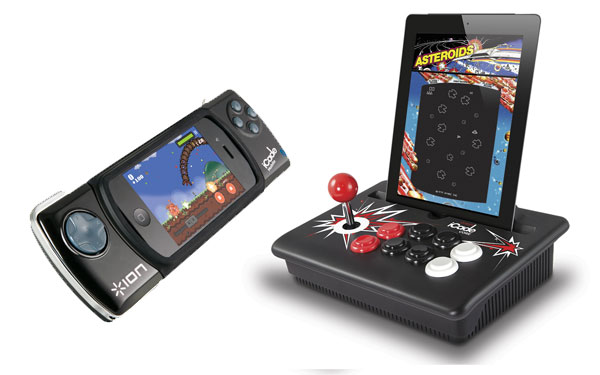 The iCade has come a long way from its humble beginnings as a ThinkGeek April Fool’s gag. After trading out a fictional 30-pin dock connector for a very real Bluetooth radio and well, actual existence, it even spawned a (notably competitive) copycat product. This week, ION is unveiling a pair of new iCade products at CES, streamlining the original nostalgic tablet dock, as well as expanding its tactile toggles to iPhone and iPod touch owners.

The iCade Core faithfully recreates the original rig’s control setup, Bluetooth connectivity, and passthrough charging cable, but kills the cabinet motif in favor of landscape support. Although there’s no word yet on pricing for slimmed down arcade dock, ION says it should launch sometime in 2012. The new iCade Mobile, on the other hand, is penned in for a Q2 launch; it’ll set you back $80 and score your iPod touch / iPhone four shoulder buttons, four face buttons and a classic D-Pad. The gamepad dock also swivels your device into landscape and portrait modes. Stay tuned for our hands on, or read on for the official PR.

Update: While glancing at Ion’s booth, an impressively small, phone-sized arcade cabinet caught our attention. Dubbed the iCade Jr., we’re told it’s essentially an iCade for the iPhone. The unit we saw wasn’t a working model, and there was nary a mention of pricing or availability, but you can catch some close-up shots of the tiny little number in the gallery below

Joe Pollicino and Amar Toor contributed to this report.

iCade cuts the fat for CES, introduces handheld brother (update: video and iCade Jr.) originally appeared on Engadget on Sun, 08 Jan 2012 19:17:00 EDT. Please see our terms for use of feeds.