Enlarge / The IceCube facility sits at the South Pole above an array of photodetectors, drawn into the image above. (credit: IceCube Collaboration, U. Wisconsin, NSF ) Neutrinos are one of the most plentiful particles out there, as trillions pass through you every second. But they’re incredibly hard to work with. They’re uncharged, so we can’t control their path or accelerate them. They’re also nearly massless and barely interact with other matter, so they’re hard to detect. All of this means that a lot of the predictions our physics theories make about neutrinos are hard to test. The IceCube detector , located at the South Pole, has now confirmed a part of the Standard Model of physics, which describes the properties of fundamental particles and their interactions. According to the Standard Model, neutrinos should become more likely to interact with other particles as their energy goes up. To test this, the IceCube team used neutrinos thousands of times more energetic than our best particle accelerators can make and used the entire planet as a target. Polar cube IceCube consists of hundreds of detectors buried in the ice under the South Pole. These detectors pick up particles that move through the ice. In some cases, IceCube sees a spray of particles and photons when something slams into one of the atoms in the ice. In other cases, particles simply nudge the atoms, liberating a few photons. There’s no neutrino source pointed at IceCube, though. Instead, it relies on natural sources of neutrinos. Some of these are produced far away in space, and travel great distances to Earth. Others are produced as cosmic rays slam into the atmosphere. Read 9 remaining paragraphs | Comments 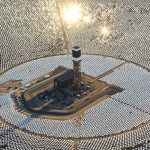