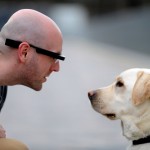 Log in with your skull via bone conduction biometrics