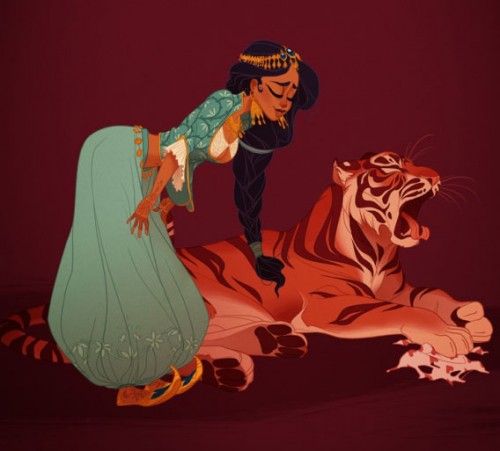 Illustrator Claire Hummel has taken a look at the Disney princesses with a historical eye, from Snow White’s 16th-century Germany setting to Belle’s late 18th century French environment. She found that the clothes they wore didn’t match up to the historical settings very well and decided to set things straight. Here’s what Claire had to say about her interpretation of Jasmine from Aladdin (above):

“Let’s be frank — Aladdin is hardly an exercise in historical accuracy… It took some effort to track down some midriff-baring outfits but BY GEORGE I DID, thank you Persian fashion plates. I now know what sirwal are called (besides Hammer pants), and that Persian women wore some pretty sweet little jackets that I wish I owned.”

You can read about the rest of her findings over at Flavorwire. Prints are available on Claire’s site – wouldn’t they be a lovely addition to the room of a princess-obsessed little girl?