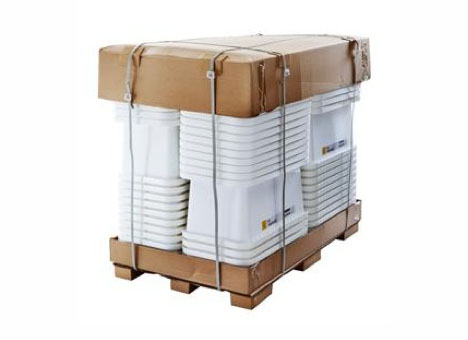 In just a few weeks, Ikea will enact a massive design change that will be largely invisible to consumers: They’re ditching wooden shipping pallets in favor of cardboard ones. The furniture giant has designed a way to fold corrugated cardboard into a structure that is far thinner than a traditional wooden pallet, yet can still support the 1,650 pounds necessary to transport their goods. According to Bloomberg Businessweek,

One-third the height of wooden trays at 5 centimeters (2 inches) and 90 percent lighter at 2.5 kilos, they’ll save thousands of truck trips and cut transport bills by 140 million euros ($193 million) a year at a cost of 90 million euros for paper purchases and new forklifts, Ikea says.

As Ikea uses some 10 million pallets a year, if the experiment is a success it’s a good bet that other retail giants will take notice. But the thing that has analysts skeptical is that the pallets can only be used once. While they’ll surely be recycled afterwards, perhaps on-site at each facility, this bucks the industry trend of “pooling,” whereby used wooden pallets are collected by companies dedicated to the task who then redistribute them to other retailers, prolonging the pallets’ lives. We’re curious to see how the green balance shakes out on this one.