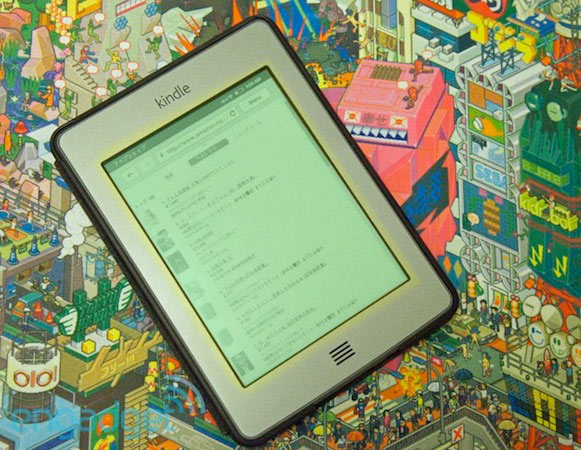 Rumors relating to a new Kindle, or three, land in our inbox with surprising frequency, but when they come from our brethren at TechCrunch, we’ll definitely give it a listen. Devin Coldewey reports how he was lucky enough to snatch a glance at an in-development Kindle, which sports an illuminated screen. Amazon’s purchase of Finnish firm Oy Modilis, which has a quiver of patents pertaining to lighting technology, adds credence to the idea that an e-reader with some form of lighting could be in the works, and Coldewey thinks he’s seen it. He says tapping the screen reveals a slider that, when dragged to the right, “lit up evenly with a rather cool light.” Importantly — for eyes and batteries alike — the light is said to be softer, and of a gentler blue-white color, compared to the harsh white common in LCDs. The loose-lipped wielder of this device claims that the industrial design isn’t finished yet, but did hint at a 2012 release. We’re not holding our breath, but the chance to do away with additional light accessories, is definitely enough to have us keep our fingers crossed.

Illuminated Kindle e-readers could arrive this year, also, might not originally appeared on Engadget on Sat, 07 Apr 2012 09:17:00 EDT. Please see our terms for use of feeds.