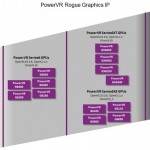 Imagination Technologies While most companies are withholding their big phone and tablet-related news until Mobile World Congress next month, this year’s CES is shaping up to be a busy one for mobile chip designers. Nvidia unveiled the latest version of its Tegra SoC last night, and this morning Imagination Technologies took the wraps off of some new graphics IP for mobile chips. There are two new designs being announced today, both relatives to the PowerVR Series 6 GPUs that are beginning to ship in phones and tablets today. At the top-end is the new PowerVR Series 6XT , which promises a 50 percent performance improvement and better power consumption compared to Series 6. These improvements come entirely from architectural optimizations, not more execution resources—the new GX6250, GX6450, and GX6460 parts use two, four, and six of Imagination’s “computer clusters,” the same number available in Series 6 GPUs. There’s also a GX6240 part, which uses two clusters but is “area-optimized” to take up less space in an SoC die. Like Series 6, Series 6XT supports DirectX 10, OpenGL ES 3.0 , and OpenCL 1.x on the API side. The Series 6XT GPU. The other GPU design being announced today is the Series 6XE series, which are being targeted to especially inexpensive or small SoCs. The G6050 and G6060 are both “half-cluster” parts—the two chips are identical aside from the G6060’s PVIRC2 lossless image compression support. The G6100 and G6110 are single cluster parts, again differentiated by PVIRC2 support in the G6110. The GPUs support only DirectX 9 shader model 3, a step down from the Series 6 and Series 6XT parts, but still support OpenGL ES 3.0 and OpenCL 1.x. Read 1 remaining paragraphs | Comments

The Jolt is a $500 electric bike for the masses

20% of Scientific Papers On Genes Contain Conversion Errors Caused By...