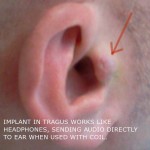 Rich Lee, a “grinder” (someone who has surgical enhancements and/or modifications conducted upon their person), implanted a magnet in his ear that he can use as a speaker; he wears a coil on a necklace that he can use to transmit to it (he was inspired by this Instructable ), and is now branching out into some serious experimentation: Listening to music is nice and probably the most obvious answer, but I intend to do some very creative things with it. The implant itself is completely undetectable to the naked eye. The device & coil necklace are are easily concealed under my shirt so nobody can really see it. I can see myself using it with the gps on my smartphone to navigate city streets on foot. I plan to hook it up to a directional mic of some sort (possibly disguised as a shirt button or something) so I can hear conversations across a room. Having a mic hooked up to it and routed through my phone would be handy. You could use a simple voice stress analysis app to detect when people might be lying to you. Not to say that is a hard science, but I’m sure it could come in handy at the poker table or to pre-screen business clients. I have a contact mic that allows you to hear through walls. That might be my next implant actually. He also wants to hook it up to an ultrasonic rangefinder and learn to echolocate. He’s going blind, so being able to use his hearing for physical nav is going to be important to him. He also wants to hook it up to a Geiger counter. DIY Headphone Implant ( via M1k3y )

Over 100 Hours of Video Uploaded To YouTube Every Minute