Add / Remove One of the most effective ways to empower disadvantaged young people is to give them access to the same educational resources that are available in the developed world. Which is exactly what Andela is doing — the global talent accelerator provides paid training and mentorship to promising young people in Africa, before linking them up with companies around the world in need of remote developers. Students can apply for a place on the four year paid fellowship at Andela’s campus in Lagos, Nigeria. They attend a free, two week boot camp which involves a rigourous screening process. Less than one percent of applicants are successful, but those who are then proceed to undertake full time training for three to five months. As software developer trainees they receive at least 1,000 hours of hands-on training in HTML, CSS, JavaScript and other front-end and back-end technologies. Once students have enough coding experience they begin working as a remote developer for any number of global tech companies. After their four year commitment is complete they can either remain on Andela’s books or apply for a job elsewhere using the experience, portfolio and references they have earnt during the fellowship. Companies in need of developers can employ Andela developers at roughly half the cost of comparable workers elsewhere, in the knowledge that they are still being fairly recompensed. They work within the companies business hours and are supported by senior Andela developers. Andela, which is based in New York, gives promising young people in Africa a chance to earn a living in a rapidly growing industry without requiring them to leave their country — and in doing so helps to improve the local economy. Could this scheme work elsewhere? Website: www.andela.co Contact: www.twitter.com/andela 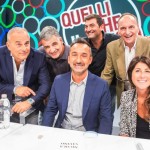 Mafia used the text-message ticker at the bottom of a sports...