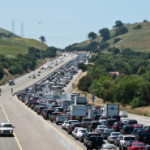 Add / Remove Congestion on Atlanta’s Interstate 85 during peak hours is so bad that the state is now offering toll credits to commuters who take public transport to work instead. The I-85 express lanes sees an average of 23,000 trips a day — a problem that Atlanta has attempted to curb in the past by rewarding users who carpool or avoid the dreaded 7-8am time-slot. Now, commuters can earn up to USD 60 every six months in toll credits by connecting their bus pass with their Peach Pass — the electronic toll collection device: they simply register for the pilot program and each time they take public transport instead of driving, they earn USD 2 in toll credits. We have seen a number of similar initiatives — such as Singapore’s Urban Engines and Gothenburg’s free bicycles where governments offer incentives to promote greener, more pleasant travel. Could the scheme work in other traffic-heavy cities too? Website: www.peachpass.com Contact: commutercredits@peachpass.com

More:
In Atlanta, rush hour commuters get paid to take the bus