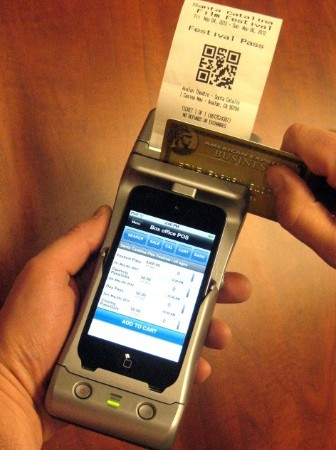 Converting a cellphone into a credit card reader is nothing new, but transforming one into a box office for live events could shake things up a bit — or, at least provide a bit of friendly competition for NFC-based alternatives. In Ticketing has just launched InHand Box Office software for use at live events. The company claims to be one of the greener ticketing outfits out there, and plans to turn your iPhone or iPod touch into a device capable of wirelessly processing payments (and printing out paper receipts, unlike Square or PayPal Here) at independently run concerts or festivals. Potentially reducing time spent in line and preventing congestion at the entrance translates into more people inside the venue, and using your phone instead of a difficult-to-establish credit card merchant account should reduce the friction in throwing such an event. As long as you tend to carry the appropriate iDevice with In Ticketing’s new app installed, you can marry it to that iAPS Sled you see above to create your own personal CC processing machine. The only issues? Convincing Gotye to play your house party instead of Coachella next year, and that awkward lack of support for Android, BlackBerry and Windows Phone.

Continue reading In Ticketing increases options for venues and promoters, as long as they’re using iOS

In Ticketing increases options for venues and promoters, as long as they’re using iOS originally appeared on Engadget on Thu, 26 Apr 2012 07:53:00 EDT. Please see our terms for use of feeds.

In Ticketing | Email this | Comments

Continued here:
In Ticketing increases options for venues and promoters, as long as they’re using iOS