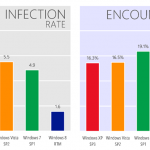 This is Exactly What New Horizons saw Zipping by Pluto