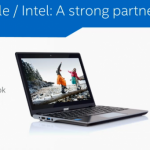 Intel Intel Intel likes Chrome OS. Need proof? The company is apparently the number-two contributor to the operating system’s code after Google itself. Intel and Google also co-hosted a small event in San Francisco today, intended to highlight Intel’s commitment to Chrome OS and the number of PC OEMs that are shipping Intel-equipped Chromebooks. Many of Intel and Google’s announcements were about products we already knew about: there’s a multi-colored HP Chromebox coming in June for an as-yet-undisclosed price, and LG’s Chromebase all-in-one will be here later this month for $349. Both Acer and Dell are also tweaking their existing 11-inch Chromebooks, providing a faster Core i3 CPU option to complement the lower-end Celeron offerings. The Acer version will cost $349 when it launches later in the summer, while the Dell model will ship later in the year. Intel and Google started by telling us more about Chrome devices we’ve already met. Intel The truly new Chromebooks announced at the presentation used Intel’s Bay Trail platform rather than the more common Haswell chips. These gadgets share a number of characteristics: like the ARM Chromebooks we’ve seen so far, they’re fanless. Intel says they’ll run for “up to” 11 hours, compared to around 10 hours for Haswell designs, and they’ll include Intel’s 802.11ac Wi-Fi adapters instead of the single- and dual-band 802.11n adapters most current Chromebooks use. Bay Trail Chromebooks are going to give up a significant amount of CPU and GPU performance compared to even the slowest Haswell chips, but the other benefits may outweigh that hit. Bay Trail comes to Chromebooks. Intel Asus, Acer, Toshiba, and Lenovo will be the first PC OEMs to ship Bay Trail-based Chromebooks, not counting a basic education-focused reference design that Intel showed off during the presentation. Asus is offering both 11-inch (C200) and 13-inch (C300) Bay Trail Chromebooks with dual-core Bay Trail Celeron chips (the N2830 , to be exact), 2GB of RAM, 16GB of solid-state storage, 1366×768 displays, and 802.11ac. The 11-inch model weighs 2.5 pounds, while the 13-inch model is 3.1 pounds, and the lineup will reportedly start at $250 . The Toshiba and Acer models weren’t shown, and we don’t yet know anything about specific specifications, pricing, or availability for either of them. Lenovo’s Chromebooks are a little more intriguing . The company is offering two models, the N20 and the N20p. Both use 11.6-inch 1366×768 displays, quad-core Bay Trail Celeron chips, 2GB or 4GB of RAM, 16GB of solid-state storage, and about eight hours of battery life. The difference between the two is that the N20p integrates a Yoga-like flexible hinge and a touchscreen that can be flipped backward (though it won’t sit flush against the bottom of the laptop like the regular Yogas will). The standard N20 will start at $279 when it’s available in July, and the N20p will start at $329 in August. The event also played up Chrome OS’ momentum in the marketplace, though no one who spoke used specific sales numbers. They chose instead to focus on other metrics—that seven of the top 20 best-selling laptops on Amazon are Chromebooks, that the Asus Chromebox  has been the best-selling desktop on Amazon since it was introduced, and that Amazon customer reviews on these devices are generally favorable. Eight major PC OEMs are now selling Chrome OS devices, and they’re available in 20 countries (with nine more countries to follow). Chromebooks were initially available from just two PC OEMs, but six more have since joined them. Intel The Q&A session with representatives from Acer, Lenovo, Dell, and Google yielded few substantive answers to the most interesting questions. Can we expect a Chrome OS tablet, as has occasionally been rumored ? Are any of the OEMs planning to build a machine more like the Chromebook Pixel and less like a netbook? What about Chromebooks with larger screens since most of the current crop includes 11.6-inch panels? The reps would only give some version of “we’re always evaluating new form factors” before moving on. Even if the computers highlighted and announced today aren’t mind-blowing individually, the breadth and variety of the Chrome OS ecosystem as a whole has become quite impressive in the last two years. There’s still a conspicuous gap between the Acer C720 and HP Chromebook 11 at the bottom of the laptop pile and the Chromebook Pixel at the top of it, but as of this summer Chrome OS will come in pretty much any form factor you could want. In 2011 all we had were a couple of lackluster netbooks that retailed for $499 . Now you can even grab touch-enabled laptops, mini desktops, and all-in-ones for well below that price. All we need to do is wait another couple of years to see whether this is the birth of a vibrant new post-PC ecosystem or a netbook-style gold rush. Read on Ars Technica | Comments