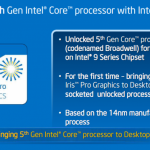 One of the few looks we’ve gotten at a Broadwell CPU so far. Intel New CPUs and chipsets from Intel normally go hand-in-hand, but earlier this month when the company announced its 9-series chipsets , all we got was a slightly faster clock speed bump to Haswell . News of truly new CPUs based on the upcoming “Broadwell” architecture was nowhere to be found, and we’ve generally heard very little about Broadwell aside from an announcement of a  delay  into the second half of 2014. There are many months in the second half of 2014, but Intel CEO Bryan Krzanich got a little more specific in a statement to Reuters today . “I can guarantee for holiday, and not at the last second of holiday,” said Krzanich. “Back to school—that’s a tight one. Back to school you have to really have it on-shelf in July, August. That’s going to be tough.” This means we’ll most likely see Broadwell chips (and, more importantly, new devices from OEMs that can use Broadwell chips) sometime between September and early December. Read 1 remaining paragraphs | Comments