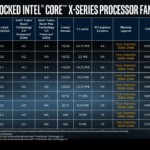 Intel made a big splash at Computex with its new Core i9 X-series family , which is spearheaded by its first 18-core processor for desktops. But we haven’t much in the way of technical details, until now. Today, Intel revealed that the 18-core i9-7980XE will feature a base speed of 2.6GHz, with a Turbo Boost 2.0 clock of 4.2GHz. And using Turbo Boost 3.0, which speeds up performance of its fastest two cores, it’ll reach 4.4GHz. That’s just below the 4.5GHz top speed of Intel’s Core i7-7700K, its fastest mainstream processor for desktops. Basically, that means the 18-core chip will be no slouch when it comes single-threaded performance for games. (Check out our in-depth story on the development of the 18-core processor here .) Yes, it might seem strange to see the company’s most powerful processor with a base clock speed under 3GHz. But what’s more important are the boost figures, which will kick in when you actually need more computing power. As for the other members of the X-series family, the 16-core model will feature speeds between 2.8GHz and 4.4GHz, while the 14-core version starts at 3.1GHz. As usual, Intel can reach higher speeds on chips with fewer cores, since there’s less of a heat issue to worry about. It’ll be a while until we get full benchmarks from these chips, but Intel gave us a small preview from its own testing. The 16-core i9 CPU reached a Cinebench R15 score of 3200, while running an NVIDIA GTX 1080Ti GPU. That’s below a 24-core Xeon E5 2697, according to 3D Fluff’s database . The quad-core i7-7700K, meanwhile, scored just 966 on that same benchmark. You can nab the 14-18 core i9 CPUs on September 25th, while the 12-core version is coming sooner, on August 28th. The other chips are already available on the market. Intel Source: Intel

Researcher advises against use of Sophos antivirus on critical systems

Where does the Apple ‘command’ icon come from? Would you believe…...