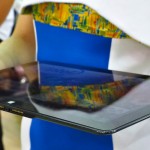 When Intel announced the new 14nm Core M (Broadwell) processor to enable thinner, fanless convertible devices, I knew the “Llama Mountain” reference design would be impressively svelte. But hearing a spec is different than seeing it; this laptop-tablet hybrid is insanely skinny. At 7.2mm (0.28 inch), the slate is thinner than the iPad Air (7.5mm), and it’s also significantly lighter than two-in-one devices already on the market; it’s a notebook-class PC running Windows 8.1 Pro, yet it weighs just 1.47 pounds, compared to 1.76 pounds for the Surface Pro 3 . The prototype’s light and slim footprint is made possible the Core M’s efficiency and low heat production — the chip allows for a fanless design. Despite its slimness, the slate can fit a 32Wh battery, which should get you at least eight hours of regular use on a full charge. Of course, different OEMs may opt to use a different-sized fuel pack, so once devices running the Core M come to market we could see even longer run times. ASUS announced its own similar computer at Computex yesterday — the Transformer Book T300 Chi — which you’ll actually be able to pick up in stores, unlike Intel’s reference design, which won’t ship to consumers. The ASUS slate, which is only a hair thicker at 7.3 millimeters, also includes a 12.5-inch touchscreen. The Chi’s display features a 2, 560 x 1, 440 display, and while Intel reps were unable to confirm the Llama Mountain reference design’s resolution, it’s not unreasonable to expect a similar pixel density from other manufacturers. Since we’re talking about a device category that’s part-work, part-play, it’s only natural that Intel’s reference design includes a separate media dock. To that end, the base of the device — the only edge that isn’t hair-thin — is just barely thick enough to accommodate the requisite dock connector, along with a 3.5mm headphone jack and a USB 3.0 post. It’s kind of hard to imagine tablets getting even skinnier, but with Intel’s ever-evolving technology, they probably will. For now, though, we can all look forward to carrying a tablet (and keyboard base) that’s shockingly thin. Zach Honig contributed to this report. Filed under: Laptops , Tablets , Intel Comments

Excerpt from:
Intel’s Windows 8.1 Pro Broadwell tablet is thinner than the iPad Air

Civilians Try to Lure an Abandoned NASA Spacecraft Back to Earth