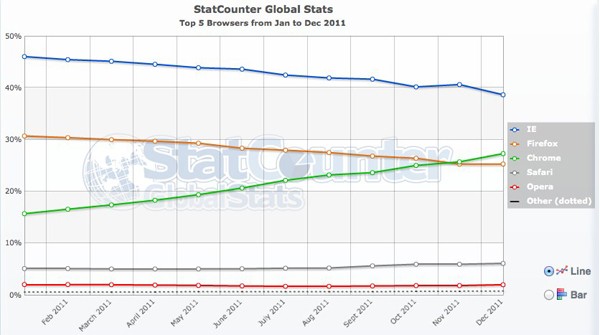 Both Net Applications and StatCounter have released their figures for browser market share for 2011 and it makes for largely unsurprising reading. Internet Explorer’s full share has dropped but it still maintains the top spot — a 52 percent share according to Net Applications and 39 percent according to StatCounter. Meanwhile, second place remains tantalizingly within reach for Chrome, which has made headway catching up with Firefox, whose growth had apparently stalled during 2011. According to Net Applications, Firefox held a 21.8 percent share of browser users this month, while Chrome reached 19.1 percent, up just under 8 percent and capping off a second year of impressive growth. Meanwhile, StatCounter pegs Google’s browser at second place for the end of the year, claiming 27.3 percent versus the 25.3 percent share grabbed by its vulpine rival. Unsurprisingly, the Windows Team Blog takes a different slant on recent browsing trends, trumpeting that its latest version, Internet Explorer 9, continues to grow on Windows 7. This is, however, balanced out by a corresponding drop in the users of its predecessor, IE 8. Better luck next year, eh, Microsoft?

Internet Explorer holds onto top browser crown while Chrome and Firefox tussle over second place originally appeared on Engadget on Mon, 02 Jan 2012 21:21:00 EDT. Please see our terms for use of feeds.