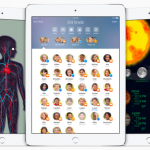 (credit: Apple) Apple has just released the first beta of iOS 9.3 to its public beta testers and developers. The company regularly releases beta versions of its operating systems, but this update is unique because Apple has put together several pages extensively detailing its new features , something we normally don’t get until we see the release notes posted with the final version of the update. Collectively, this list of new features will make 9.3 the biggest release since iOS 9.0 . The first and most significant is a multi-user mode for iPads, aimed primarily at schools where buying a single iPad for each student is too expensive or otherwise undesirable. From Apple’s description, it sounds as though each student will have a roaming user profile that follows them from iPad to iPad so they can access the same apps and data no matter which iPad they use to login. User content can be cached so that students who regularly use the same iPad won’t have to wait for data to download each time they log in. These new user profiles are just one part of a larger group of features meant to make the iPad more appealing for schools. The “classroom” app gives teachers a bird’s-eye view of their students and what apps they’re using. The app can be used for screen sharing to help students out when they need it or to lock students out of specific apps when they’re not supposed to be using them. The Apple School Manager can be used by administrators to create Apple IDs, purchase apps, and manage devices. And a new type of Apple ID, the “Managed Apple ID,” can be created and assigned by schools independently of students’ normal Apple IDs. Read 5 remaining paragraphs | Comments

400 Tor-anonymized domains tracked down and seized in global crackdown