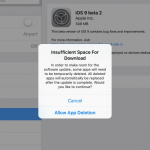 Early adopters of iOS 9 beta 2 have discovered a new feature that will temporarily delete apps from overloaded devices when there isn’t enough space to install system updates. Many users with the smaller 8GB and 16GB iPhones reportedly had difficulty fitting the last upgrade onto their mobile devices. And while iOS 9 is only a fraction of the size of iOS 8 (they’re 1.3 GB and 4.3 GB, respectively), Apple is clearly trying to nip similar complaints in the bud this time around. The new feature will of course reinstall the deleted app once the update has completed — plus, presumably, any user data that was deleted along with the app itself. Filed under: Software , Apple Comments Source: MacRumors

Read the original:
iOS 9 will delete apps to make room for system updates