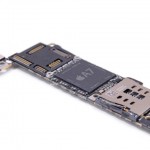 The iPhone 5S (shown above, in system board phone) and the iPad Air share the exact same SoC. That doesn’t mean there aren’t differences. iFixit When Apple announced its new iPad Air and Retina iPad mini in San Francisco last week, one of the most surprising revelations was that the tablets would both be powered by the same Apple A7 chip used by the iPhone 5S. Since the third-generation iPad was released in early 2012, the vastly different display resolutions of the phones and tablets (1136×640 for iPhones, 2048×1536 for iPads) meant that different chips were needed. Smaller chips like the A5 and A6 were used to meet the power requirements of the phones, while the A5X and A6X picked up more powerful GPUs and wider memory interfaces to drive the tablets’ larger displays. Early reviews of the iPad Air were posted last night, and as usual Anand Shimpi of AnandTech had the most detailed information to share about the tablet’s innards. The short version? For the first time since the iPad 2 and iPhone 4S shared the A5 SoC back in 2011, the flagship iPhones and iPads are using the same silicon. Making the numbers add up Let’s begin with Apple’s performance promises. Apple said that the A7 in the iPhone 5S could often double the CPU and GPU performance of the A6 in the iPhone 5, and our review bore these observations out. Apple also said that the A7 in new iPad Air and the Retina iPad mini could deliver roughly double the CPU and GPU performance of the A6X in the fourth-generation iPad. And yet, the A6X offers roughly twice the GPU power of the A6—our biggest question coming out of the iPad announcement last week was just how all of these statements could be true if the iPhone and iPad were using the same chip. Read 8 remaining paragraphs | Comments

More:
iPad Air’s A7 chip is identical to the iPhone’s, just faster

Surely someone cares about the official ‘Angry Birds’ sequel