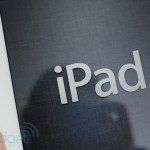 Welcome to the new new iPad, same as the old new iPad . Well, mostly, anyway. It was less than eight months ago that Apple grafted a Retina display onto its world-conquering tablet, giving every other slate on the market resolution envy, while enchanting gadget lovers with world-class performance and battery life. Now, it’s obsolete. Put out to pasture just as it was hitting its stride and replaced by this, the fourth-generation iPad — still just called “new iPad.” Other than a Lightning connector on the bottom it’s visually indistinguishable from its predecessor. Even its starting MSRP of $499 stays the same. But, on the inside where it counts, is the new, fire-breathing A6X processor. Could this be possibly worth buying a second new iPad in just one year, or could this perhaps be the one you’ve been waiting for? Hold on to your wallets and click on through to find out. Gallery: Apple iPad 4th-generation hands-on, and comparison to 3rd-generation iPad Continue reading iPad review (late 2012) Filed under: Tablets , Apple iPad review (late 2012) originally appeared on Engadget on Tue, 30 Oct 2012 21:00:00 EDT. Please see our terms for use of feeds . Permalink    |   |  Email this  |  Comments