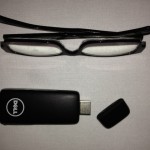 Dell’s Project Ophelia: an Android-based thin client that you can put in your pocket for around $50, eventually. Dell Dell is reportedly investigating a move to take the company private in a leveraged buy-out to clear the decks for a radical repositioning of the company. And according to a report from Atlantic Media’s Quartz , that includes relaunching Dell’s desktop and mobile business around a brand-new product: a computing device the size of a thumb-drive that will sell for about $50. Dell announced its pocket client PC, called ” project Ophelia ,” on January 8, and demonstrated it at CES. Developed by Dell’s Wyse unit, Ophelia uses a Mobile High-Definition Link (MHL) to draw power to boot from an HDTV display, or it can be powered off a USB port. It has integrated Bluetooth and Wi-Fi capability for connecting to a keyboard, a mouse, and the network, and it runs the Android 4.1 (Jelly Bean) operating system with all of the functionality of a tablet. It can also be used to power virtual instances of other desktop operating systems on a remote server or in the cloud. In other words, it’s a fusion of Wyse’s thin client technology modeled after the capabilities of a Google Chromebook—except it can be carried in a pocket. The main drawbacks are that few HDTVs currently support MHL—though such support can be found in a number of Dell flat-panel displays. Read 2 remaining paragraphs | Comments

Read the original post:
Is Dell looking to kill PCs with “Project Ophelia”?