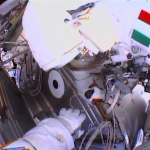 American Chris Cassidy and Italian Luca Parmitano were forced to call off this morning’s planned spacewalk outside the International Space Station when Parmitano suddenly reported that there was water inside of his suit helmet. “My head is really wet and I have a feeling it’s increasing, ” he radioed about an hour into the spacewalk. Video of the aborted EVA, starting with the discovery of the water. The call to terminate EVA comes at 12:45. Station airlock opens at 44:48. The EVA, designated EVA-23, was one of the ones that Ars watched astronauts Cassidy and Parmitano train for late last year. That was during our visit to  NASA’s Neutral Buoyancy Laboratory , the giant swimming pool where NASA simulates spacewalks in microgravity. According to NASASpaceFlight’s recounting of events , Parmitano was in the process of running data cabling to connect the as-yet-unlaunched Russian Nauka module when the water began to make itself apparent. The quantity of liquid in Parmitano’s helmet rapidly increased, with Parmitano noting that it had begun to enter his eyes, nose, and mouth. Read 6 remaining paragraphs | Comments

Watch the Incredible Force of a Typhoon Move a Skyscraper’s 720-Ton... 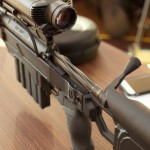 TrackingPoint shows off the “Mile Maker,” a rifle with 1,800-yard range